Familynet. For Frieda, from the heart.

A simple idea, born from a personal need: that is Familynet in a nutshell. The first version of Familynet appeared online as early as 2005, when the Internet was not yet generally accepted. A tiny piece on the worldwide web, set up especially for Frieda, making it possible to exchange messages, share photos and keep a shared diary. At the initiative of her sons, Maarten and Hein, so that everyone was and could stay up-to-date. They wrote history with this concept, in both senses of the word.

Mother Frieda was growing demented and had not been living in a nursing home for that long when her children noticed they were missing information. They tried to visit her as often as possible, but their memories kept showing gaps when it concerned Frieda’s experiences, what her days were like, which activities she took part in. It proved impossible to keep up and to convey it with the necessary precision. What a shame, the children thought. And unnecessary, as it turned out. 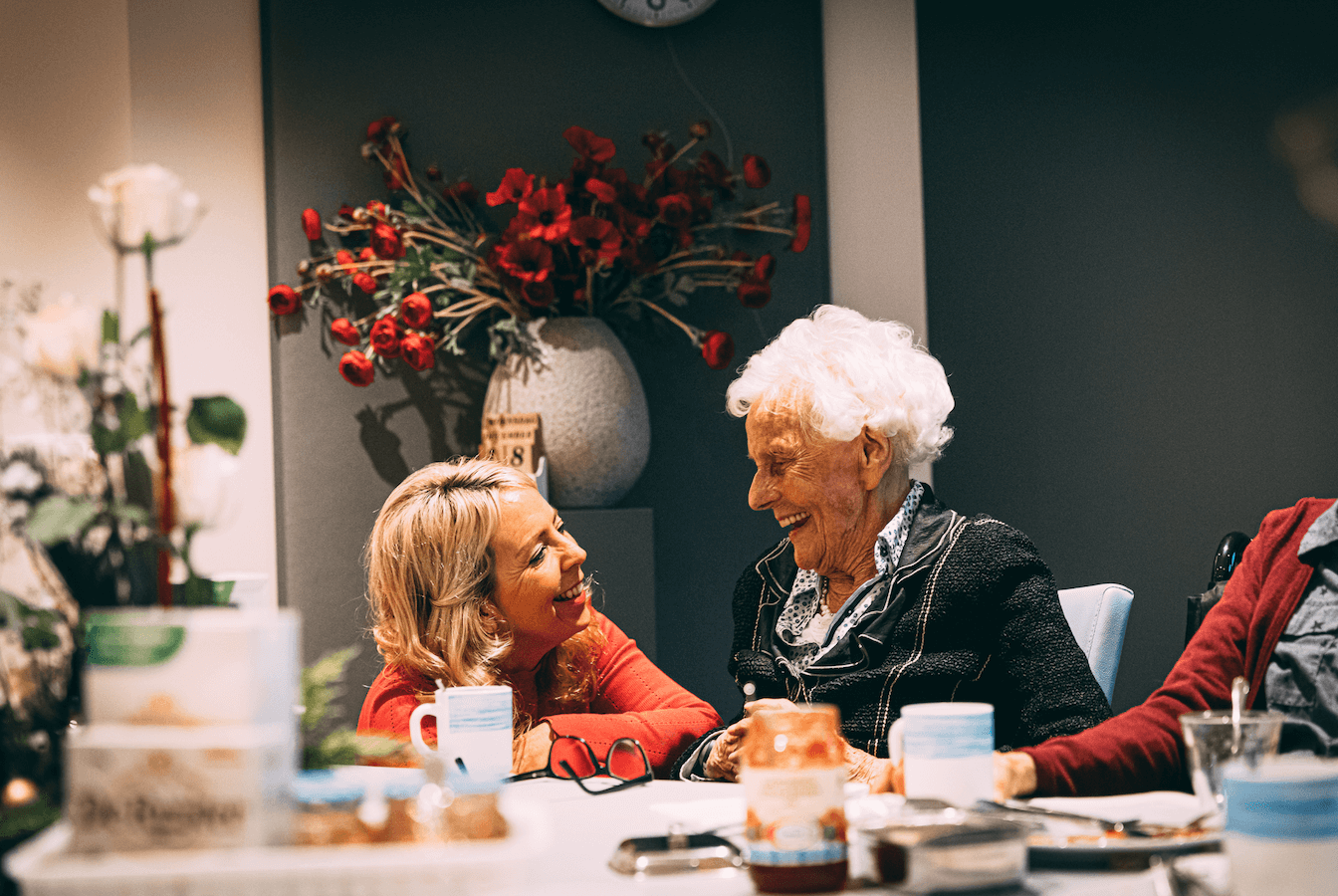 Frieda in the leading role

That tiny piece of worldwide web, created by the two brothers on the basis of their own need, resulted in a new means of communication with Frieda in the leading role and with important supporting parts for the children, as well as the members of staff of the healthcare institution Frieda was staying at. That trinity still is the most important success factor of Familynet today. The same goes for the basic functionality for that matter, because that has hardly changed compared to the first version.

Familynet 1.0 had one goal: communication with regard to Frieda. From the healthcare institution, from the children, but above all: with each other. Simple questions, short comments, sharing information fast and correctly. Because it soon emerged it was benefiting Frieda’s welfare. Everyone was up-to-date of the situation and the healthcare institution found it easy to encourage the family to contribute whenever necessary. It made a difficult period of a very slow goodbye without wanting to, bearable. Familynet 1.0 ensured everyone was much more involved.

Familynet 2.0 still does that and better than the first version. It was therefore coincidence rather than strategy that the former website survived when Frieda ultimately passed away. The healthcare institution where Frieda was staying at was enthusiastic, as were family of other residents. That tiny piece of Internet, closed off from the outside world, only accessible for those involved and so easy to use, enjoyed small-scale popularity. And anything small can also be done big.

The brothers worked on the current version for more than ten years. Initially, Frieda’s healthcare institution seemed to be visionary, but perhaps a little bit too visionary. They liked to use it, but the rest of the country was still a bit reserved. Because: was this secure at all, did they have time for it, did anyone actually want this? Yes, yes, and yes as it turned out.

Most of the objections raised then have now disappeared. Familynet was developed further and so did society. Healthcare institutions now embrace the simple yet effective concept of Familynet. From a technical point of view, it has been set up in such a way that security and privacy are safeguarded. And also: the nature of the healthcare landscape has changed. Participation by the family is desired. And necessary. Familynet facilitates that. And, as important: it makes it more fun.

Right from the heart, still

A business from the heart, so to speak. And it shows in everything. A small and close-knit team in which several family members take part. No hard acquisition, but friendly and accessible communication. A low-threshold price model. And above all; a lot of love for the product.

As mentioned earlier: the most important features have survived. They have not been expanded either. Fast and friendly communication, up-to-date immediately, being able to share: that is and remains the essence. That is quite unique in today’s Internet landscape when you think of it. No endless, modern, new gadgets. No: making sure that what is there is improved, bit by bit, so that family members and healthcare providers can get closer to each other and Familynet will be the central theme on the basis of which healthcare is organised. With personal attention, with an eye for and an interest in what is truly important. That remains the heart of Familynet.

The ambition of the Familynet team is not to further expand the range of services. That is: it would really have to add some relevance, such as the Life Log, allowing family members to create a timeline with text and images. However, the true ambition is to make Familynet even wider available: to give as many families as possible the opportunity to be and remain involved with their family member. As a safe, connecting factor between family and healthcare institution.

The best job in the world

The first international requests are now in. Which is exciting, because not every country is familiar with the participation culture we have grown accustomed to in the Netherlands. Still, they are willing to take the plunge. Familynet can be significant to anyone, wherever you are, so not just in healthcare institutions for the elderly. Other institutions that provide long-term healthcare, such as those that provide care for the disabled, also use Familynet.

In other words: plenty of options and that is something the team puts its heart and soul into every day from their home base in Groningen. Today, but also tomorrow and the day after tomorrow. They say it is the best job imaginable.

And Frieda still plays a special leading role: her presence as Familynet icon is prominent.

Users have their say with inspiring stories from practice, messages about great new features and more. Would you like to receive our newsletter a few times a year? Then sign up!